Serious injury guide and Ed Hudson. Ed sustained serious injuries, a C4 fracture of his spinal cord, in a road traffic accident in February 2018. He originally instructed another firm of solicitors but then interviewed a number of leading personal injury law firms and picked Barratts.

Ed felt it had become apparent, shortly before his discharge from his spinal unit, that very little was happening with the original solicitors. He organised a “beauty parade” of five leading personal injury lawyers and ultimately selected David Tomlinson to pursue his claim. David immediately recognised that Ed had huge potential for rehabilitation that was not being met. Additionally, Ed was facing a crisis of an imminent discharge from the spinal unit with nowhere suitable for him to go. He needed a solicitor who understood the Serious Injury Guide.

Serious Injury Guide – Going Above and Beyond for Rehabilitation

Barratts are signatories to the Serious Injury Guide which is designed to promote cooperation with insurers to provide rehabilitation alongside the litigation process. David recognised that even this approach was not going to be sufficient given the urgency of Ed’s case. To make sure Ed got the care he needed in a timely manner, David managed to reach agreement with the insurers. This allowed the claim to proceed with an even high level of cooperation than is normally found under the Serious Injury Guide. Ed, David and medical experts initially met the insurers and their lawyers at Northern General Hospital in Sheffield. As a result, Ed was appointed a case manager and he was transferred to a specialist rehabilitation centre, STEPS. He remained there until specialist, long term accommodation had been located and adapted. 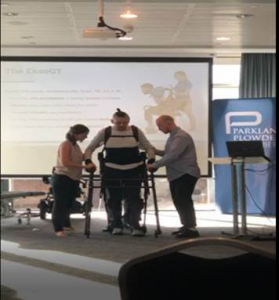 Ed ultimately moved into his specialist accommodation with a 24 hour care regime in place. He was provided with full equipment to assist him with his day to day needs. Ed also had access to specialist equipment to help him with rehabilitation, muscle strength etc and to enable him to have as much independence in his day to day life as possible.

The level of cooperation with the insurers continued. Ultimately, we were able to settle Ed’s claim following a round table meeting in May 2020, just under 2 years after David was originally instructed by Ed to pursue his claim.

Ed’s claim has been recognised as an exceptional example of what can be achieved with sufficient cooperation between specialist solicitors and insurers. Ed has spoken publicly about his claim at legal conferences and has demonstrated some of the specialist equipment that he has used including an exoskeleton.

Further details of Ed’s life and progress since his accident can also be found at his blog – www.edandneck.com.

Serious injury guide and Ed Hudson. Ed sustained serious injuries, a C4 fracture of his spinal cord, in a road traffic accident in February 2018. He originally instructed another firm of solicitors but then interviewed a number of leading personal injury law firms and picked Barratts. Ed felt it had become apparent, shortly before his […]

Asbestosis claims are complex so Larry contacted the Association of Personal Injury Lawyers (APIL) for advice. They recommended Barratts so Larry engaged us to help with his claim.

Our client, Trevor, received a diagnosis of Pleural Plaques in 2012 and asked if we could help with his industrial disease claim.  Barratts had been recommended to him by his respiratory physician who suggested he should investigate a claim for compensation. Trevor had a history of working with asbestos throughout his working life as a […]

Adam was a freight-checker in a distribution depot. His job involved checking lorry loads of materials before they were despatched, to be stored in the warehouse. On the day of the accident, an unstable load weighing in excess of 1 tonne slid off a lorry. The load crushed Adam and caused him a traumatic brain […]

Barratts was recommended to Mick when suffered serious and life-threatening injuries after he was hit in a drunk driver accident. He initially contacted an extremely experienced personal injury lawyer in Manchester who was unable to take on Mick’s case. However, the lawyer advised Mick to contact us.

Violent assault can leave victims with life-changing injuries. Tragically, Gary experienced this for himself. He contacted our solicitors in early 2017 after he had suffered a brain injury during an assault. One of our previous clients, who had also sustained serious brain injuries in an assault, recommended us to him.

My client’s family instructed me to bring a claim against the insurers of a vehicle that had collided with her car whilst she was on holiday in 2017. I didn’t know my client or her family before her accident. However in the years that I have been involved in her case, they have come to […]